Where Dylan stayed on his first visit to Cornwall 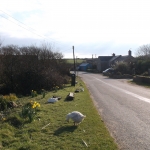 Dylan made his first visit to Cornwall in April 1936, staying at Polgigga as a guest of his friend Wyn Henderson. During his stay he worked on his poems, including part of the Altarwise By Owl-light sequence. He also wrote to T S Eliot from Polgigga, sending him a copy of his short story The Orchards with a view to Eliot including it in a book of short stories planned by Faber.

Polgigga is a tiny place two miles or less from Land’s End, and very near Penzance and Mousehole (really the loveliest village in England). We live here in cottage in a field, with a garden full of ferrets and bees. Every time you go to the garden lavatory you are in danger of being stung or bitten. My hostess, or what you like, has unfortunately read too many books of psychology, and talks about my ego over breakfast… (From a letter to Vernon Watkins, April 1936)

For his second stay in Cornwall Dylan was accompanied by his girlfriend Caitlin Macnamara, and later during their stay they would get married. They began their visit, in June 1937, staying at Oriental Cottage in Lamorna Cove, a house owned by Dylan’s former short-term girlfriend Veronica Sibthorp. From here he writes to his parents, informing them of his plans to marry Caitlin.

The cottage is in Lamorna Cove, a beautiful little place full of good fishermen and indifferent visitors. I suppose that I’m piling on the shocks and surprises in this very late letter, but I must tell you too that Caitlin and I are going to be married next week by special licence (I think that’s what they call it) in the Penzance registry office. This isn’t thought of – I’ve told mother about it many times – speedily or sillily; we’ve been meaning to for a long time, & think we should carry it out at once. Everything will be entirely quiet & undemonstrative, two of the villagers here will be witnesses, and neither of us, of course, has a penny apart from the three pounds which we have carefully hidden in order to pay for the licence. (From a letter to his parents, June 1937)

Described by Dylan as ‘the loveliest village in England’. Having started their June 1937 visit to Cornwall staying at Oriental Cottage in Lamorna Cove, Dylan and Caitlin then relocated to stay with Dylan’s friend Wyn Henderson in her small Mousehole hotel, the Lobster Pot. During their stay at the Lobster Pot the couple were married in Penzance on 11 July 1937, and the hotel hosted a party for the newly weds on their wedding night. Dylan and Caitlin also frequented the nearby Ship Inn.

My own news is very big and simple. I was married three days ago; to Caitlin Macnamara; in Penzance registry office; with no money, no prospect of money, no attendant friends or relatives, and in complete happiness. We’ve been meaning to from the first day we met, and now we are free and glad. We’re moving next week – for how long depends on several things, but mostly on one – to a studio some miles away, in Newlyn, a studio above a fish-market & where gulls fly in to breakfast. But I shall be trying to come home soon for at least a few days, along with Caitlin: I think you’ll like her very much, she looks like the princess on the top of a Christmas Tree, or like a stage Wendy; but, for God’s sake, don’t tell her that.” (A letter from Dylan to Vernon Watkins from the Lobster Pot, 15 July 1937)

Shortly after their wedding Dylan and Caitlin moved on to stay at the painter Max Chapman’s studios in Newlyn. The Lobster Pot is no longer a hotel, but the building still exists; the Ship Inn is still in operation. 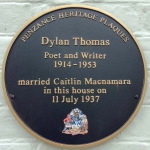 On 11 July 1937 Dylan and Caitlin married at Penzance Registry Office. The building, Phoenix House, is now a private residence, and bears a plaque commemorating the wedding. Caitlin described the wedding in her 1986 memoir Caitlin Life with Dylan Thomas

On my wedding day I wore a simple little blue cotton dress and no hat. Dylan wore his usual couduroy trousers, tweed jacket, check shirt and no tie. We had quite a lot to drink before we went down to the Penzance Register Office for the ceremony….Dylan was very romantic. Without telling me, he had gone off to Penzance and bought two little Cornish silver rings for about six shillings each, and we went through a ceremony of exchanging them.”

Close
We use cookies to improve user experience & to analyse our traffic & use of our site. By using our site, you agree to the use of cookies. Find out more.